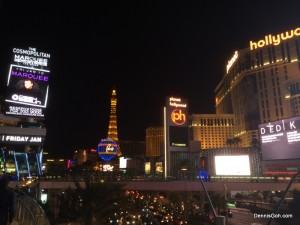 Finally arrived in Las Vegas on 6 January 2014! With one hour of 6 Jan left

Everything was closed by the time I landed around 11pm 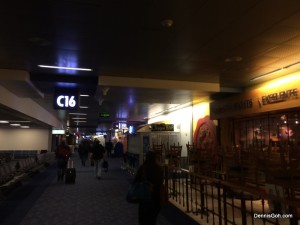 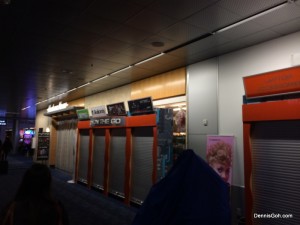 Headed quickly to the baggage claim area, BUT the bags took a really long time to come out…..everyone was just staring and staring at the non-moving conveyor belt 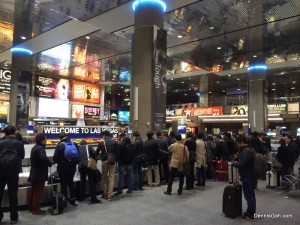 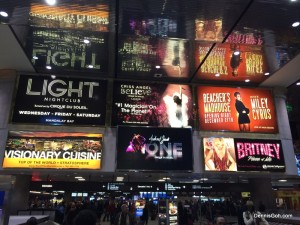 After 10 minutes, I got fed up, and decided to go collect my badge pass first. Was happy when I saw the queue was relatively ok – and then realised why. That lady in black jacket was telling everyone (including me) “We are closed for the day, sorry!” (but she did not look very sorry). And hey, it is only 1115pm! – the collection letter stated they would be opened until midnight. To no avail. 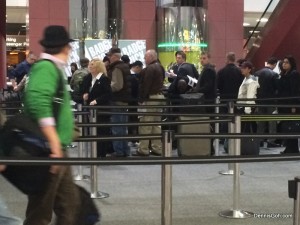 At this point, I was like “oh man” I should have come straight here instead of waiting for my dang luggage!

But here’s a useful tip for you – I decided wisely to stick around and watched her once I noticed the queue moving. And moving. Until it got shorter and shorter. And suddenly, she stepped away! That is when I rushed there and realised she was no longer stopping people from queuing. So folks, remember this tip! Don’t be demoralised and walk away, as I have seen so many people doing when she first shooed them away.

Got my badge after another 10 minutes of queueing. Headed back to the baggage claim

By now, it was now around 1140pm. You would have thought that after 40 minutes, the bags would be out. But no, no, no. It was still not moving

People were looking really “sian” (Local Singapore slang: “bored in a mildly frustrated way”) by then.

We are so close to midnight, and crapping away at this baggage claim 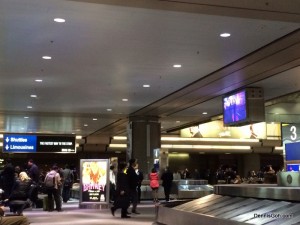 Finally around 1205am (65 minutes after landing!), the belt finally started moving. Took me another 10min to wait for my luggage to come out. By 1215am, I thought my ordeal was over. No, no, no once again – walked out and saw the welcoming sight of a looooooooooong taxi queue that now stands between the tired travelling soul and a hot shower + hotel bed. Even a rock to lie on would sound great now!

I counted at least 300 people in front of me (should have taken a shot, dang! was too busy counting!)

Took me 40min to get a taxi

Just 10min to the hotel (imagine if everything was clear!), and I arrived way past 1am

Finally got into the room around 130am

Left Singapore at 925am on Monday, arrived here at 530pm Tuesday Singapore time.

So, 2 useful tips for my fellow readers if you ever want to attend CES in the future

2. Book your hotel wayyyyyy in advance

You will not believe me what the prices are like if you book late. Try asking me next time we meet up – enough said